Sometimes you don’t go looking for Beatle records. Sometimes, Beatle records come looking for you. That was my experience about three weeks ago when an old friend asked me if I was still interested in collecting the Beatles because she had a couple of records and would I like them?

Well, yes of course I would! Always open to donations. She dropped them in a couple of days later, and you’d have to say it’s a mixed bag of goodies….

The first one wasn’t even the Beatles. It was Wings. Well, not even Wings really, just an obscure band called P.K. and the Sound Explosion doing covers of Wings: 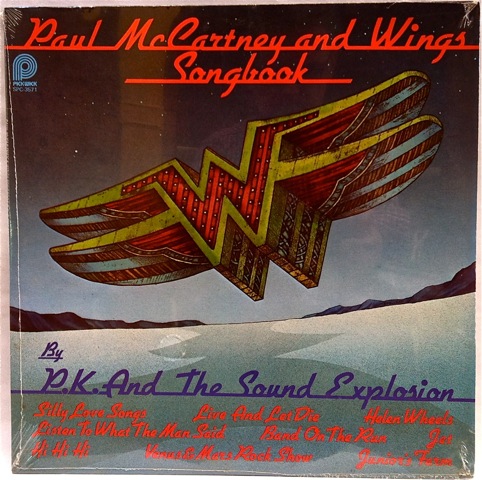 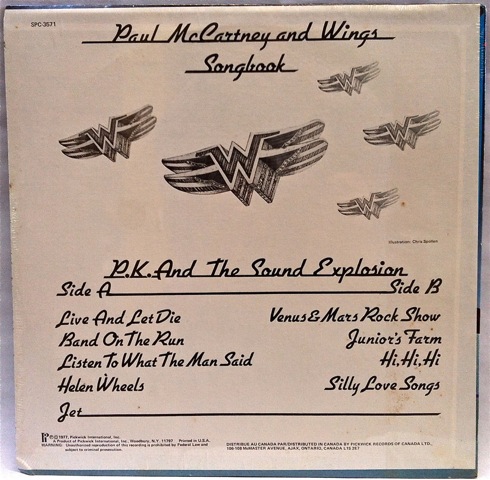 I think there are only two saving graces about this one. One is the daggy cover design featuring a (poorly) stylised version of the official Wings logo of the time. This is what the real thing looks like:

The other saving grace is that this copy is still sealed in protective plastic and is in mint condition. This is a US copy that came out on the Pickwick Records budget label back in 1977. It is so bad, it’s good! (P.K. and his group have also done a Disco Christmas LP, the Beach Boys Songbook, a Paul Williams Songbook, and the Bee Gees Songbook).

Next came three of the real thing, some it has to be said in better shape than others. For instance this very well-used example of the Australian-only cover of Beatles For Sale: 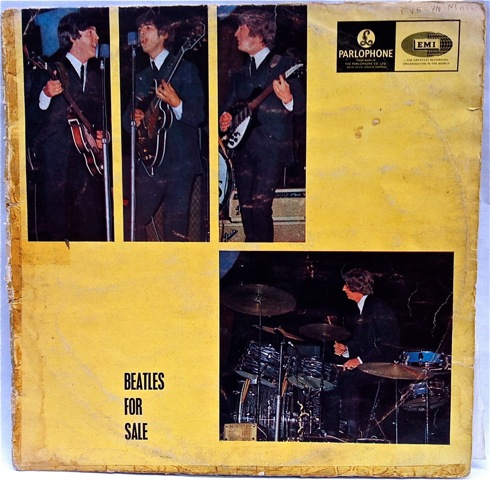 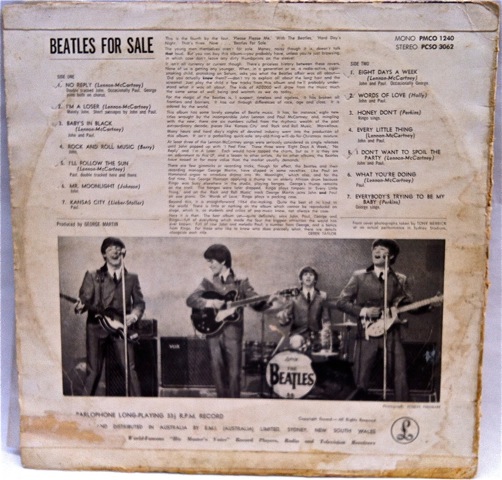 You’d have to say this is a copy that has had a good life. I’m not sure about you, but it has so much patina of age that I’m tempted to keep it just because it looks so pre-loved and lived-in. There was one other intriguing thing. When I took out the vinyl it’s the mono pressing, but not the Australian version. Here’s what I got: 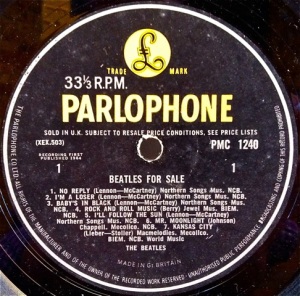 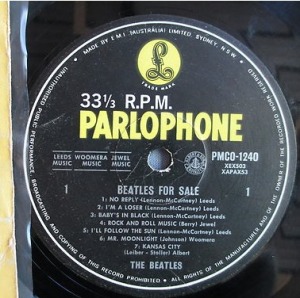 Clearly the original Aussie pressing has been played to death and someone, over the course of the long history of this particular copy of the album, has sought out another to replace it – that being the UK mono we see above….

There was another Australia-only cover in the four records my friend donated. It’s the 1972 release The Essential Beatles on the Apple label. This is a “best of” compilation and as its catalogue number suggests (TVSS 8), it was associated with a TV advertising campaign by EMI in Australia: 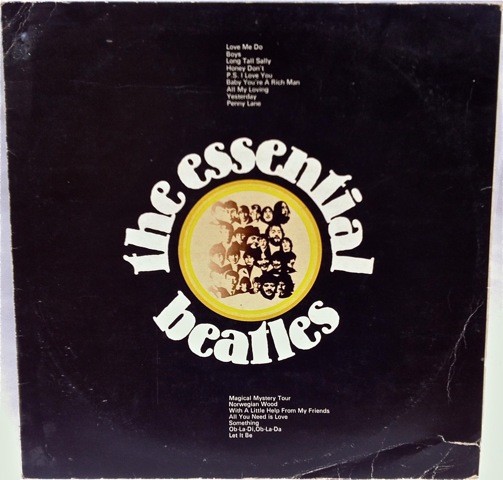 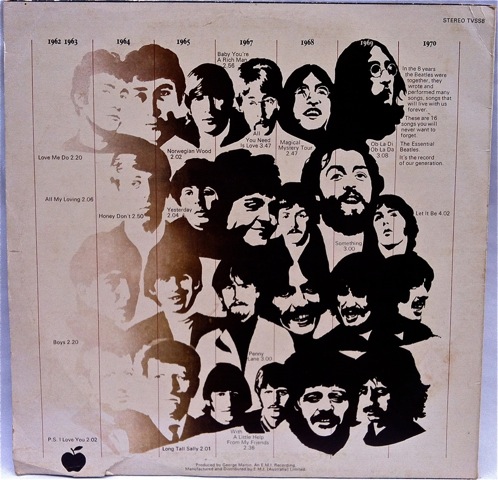 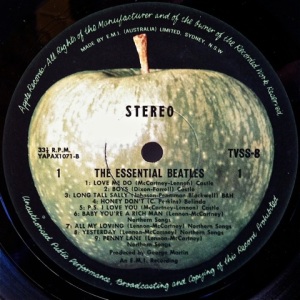 This copy of The Essential Beatles has a well-used cover but the vinyl inside is actually in pretty good shape.

Finally a double LP of the soundtrack to the documentary movie Imagine John Lennon: 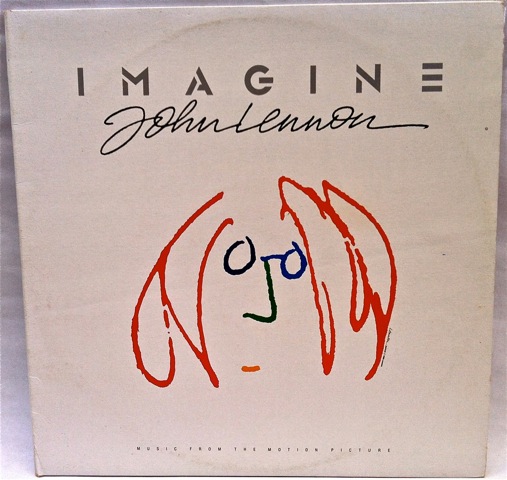 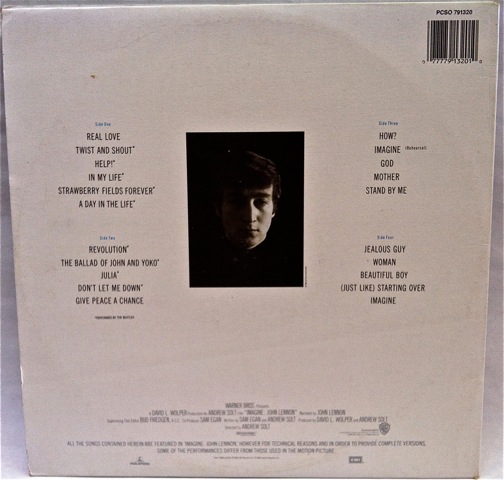 This is a gatefold album of twenty-one Beatles and Lennon songs. It is in what I would describe as good (G) to very good (VG) condition. The Internet Movie Database says of the film: This “biography” evolves around the nearly 240 hours of film and videotape fortuitously taken by Lennon of his life. The archive footage is transformed into a fascinating life story of one of the most complex and fascinating men of the modern music era….Includes some very personal and insightful footage, never before made available to the public.

The gatefold has some nice photos: 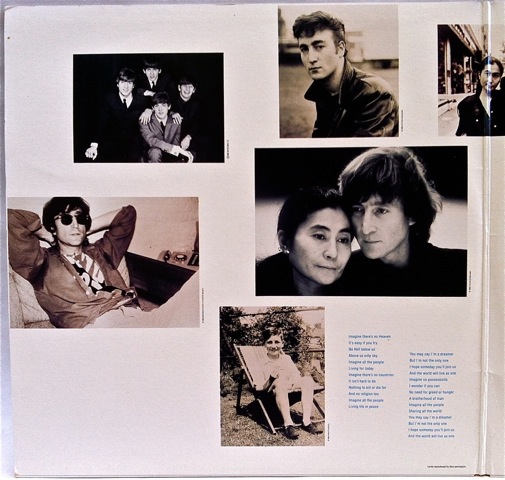 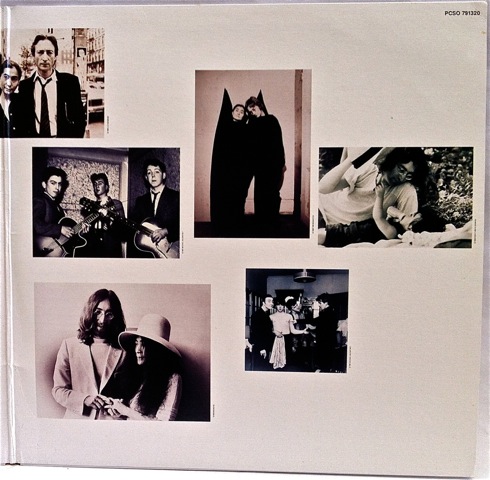 This is the Australian pressing, on the black and silver Parlophone label:

So, some varied, interesting and unusual donations from a friend. Sometimes you don’t have to go looking too far. Beatle records just come to you.